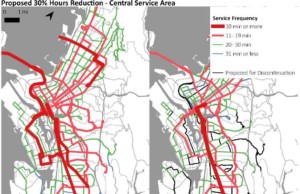 Due to Covid-19, AC Transit is considering a bus network redesign to reduce service levels by 15% to 30% to match expected reduced revenues, which will be discussed initially on Wednesday, July 8, at 5 p.m., as stated in the AC Transit Board Agenda item #6D here.

Summary for Alameda of Initial AC Transit Proposal
The AC Transit proposals included within this plan are draft proposals and reflect an initial attempt to minimize impacts on disadvantaged communities, people of color, and those of low income. AC Transit’s summary is provided along with the map below showing existing and proposed routes:

Reductions in Transbay lines will be significant in that “Transbay riders as a whole have higher income levels than local service riders and have much higher car-ownership rates.” Transbay riders have access to not only higher rates of car-ownership but also local bus service to BART as well as Alameda’s ferry terminals.

Reductions in crosstown routes such as eliminating Line 19 so as to “preserve the utility of more productive crosstown service nearby and avoid a network of purely hourly service running crosstown. Ultimately this means some residents may walk further but will have access to more frequent service than if all crosstown lines were preserved at a lower frequency.”

Longer and potentially less reliable transit lines which preserve frequency and coverage. Some lines on major corridors – Lines 51A and B for example – are proposed to be combined to make longer lines to preserve as much frequency as possible.