TWO OF THE COMMUNITY’S PUBLIC SAFETY LEADERS COME TOGETHER

Home/Community News, Security/TWO OF THE COMMUNITY’S PUBLIC SAFETY LEADERS COME TOGETHER
Previous Next

TWO OF THE COMMUNITY’S PUBLIC SAFETY LEADERS COME TOGETHER 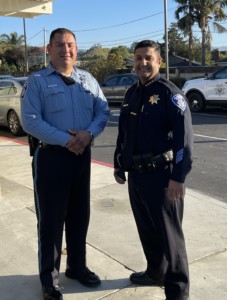 During the meeting, both leaders quickly formed a bond based on their similar backgrounds, work ethics and most importantly their steadfast desire to keep the Community of Harbor Bay Isle one of the safest and best places to live in Bay Area. With both having extensive experience, the two agreed that public safety is constantly evolving and in order to succeed, reduce crime and provide the highest level of service, both departments must be forward thinking, proactive and transparent – all with an end goal of maintaining the community’s trust.

“My goal is to not only continue but strengthen the long-standing relationship HBI Security has built over the last several decades with the Alameda Police Department” said Security Director Javier Silva. “Our departments rely on each other daily, all with a common goal of keeping the community safe.”

After 24 years with the Harbor Bay Isle Security Department, Javier Silva was promoted to Director of Security in July of this year. With his desire to help the community and his passion for public safety, Director Silva has gained the respect of public safety leaders throughout the Bay Area. For over 40+ years, HBI Security has been a place for those considering a career in public safety, to not only gain experience but help the community at the same time. Director Silva has mentored many of the over 100+ former HBI Officers who have gone on to join local, state and Federal law enforcement agencies, including over 10 who joined the Alameda Police Department.

Chief Joshi spent most of his adult life working for the Oakland Police Department. After joining the department in 1998 he quickly promoted through the ranks ultimately becoming Deputy Chief. During his career at OPD he has served the department in many capacities including a Crime Reduction Officer, Gang and Gun Task Force Sergeant, Human Resources and Training Division Captain, and Deputy Chief of the Bureau of Field Operations Two. In June of this year, he was appointed Alameda Police Chief.