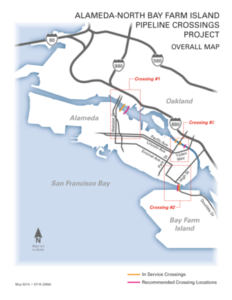 EBMUD is planning to construct three transmission pipelines (24-inch inner diameter) located within Alameda County in the Cities of Oakland and Alameda. Water service to the City of Alameda is provided by four existing underwater pipeline crossings at three separate locations between the City of Oakland, Alameda Island, and North Bay Farm Island. Failure of one of three existing crossing locations could lead to a reduction in the level of service for existing customers and potentially reduce the available water supply to Alameda Island and North Bay Farm Island. Three new pipeline crossings are proposed to replace the existing pipeline crossings to ensure long-term reliability of the water distribution system, meet existing and future water needs, and facilitate repair and replacement of aging infrastructure.

The environmental review process for the project is complete. Through this process, EBMUD assessed the impacts of the project and identified ways to reduce or eliminate the impacts with input from stakeholders and the community.  A Draft Environmental Impact Report (EIR) was prepared for the project and released for a 45-day public review on July 1, 2016. All comments received on the Draft EIR have been compiled and responded to in the Final EIR including any changes and clarifications to the Draft EIR. Copies of the Final EIR are available for public review at the locations listed below or by download via the links at the bottom of this page.

Published studies and other resources